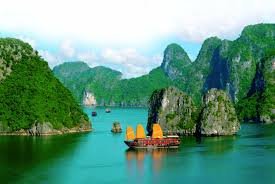 Vietnam has a long and rich poetic tradition. Much of it is oral. John Balaban, a poet and editor of a major bilingual collection of ca dao, traditional Vietnamese verse, describes those poems as “short lyric poems, passed down by word of mouth and sung without musical accompaniment by ordinary individuals – poems whose simple purpose, as Confucius noted of the ancient Chinese folk songs recorded in the Shih Ching, is ‘to stimulate the mind, train the observation, encourage social intercourse, and enable one to give vent to his complaint’” (1980: 14). Balaban suggests that this oral tradition is at least a thousand years old.

Certainly, the first recorded poem dates from 987 AD. The story is told that just fifty years after the end of a thousand years of Chinese domination, ambassador Li Chueh, visited Vietnam to establish diplomatic relations. As he was crossing a river, he sought “to impress this tiny country with the intellectual might of China” by reciting an impromptu two line verse:

There: wild geese, swimming side by side,
Staring up at the sky!

His ferryman was Do Phap Thuan, a Buddhist monk who had been especially chosen to accompany Li Chueh because of his intellectual ability. The apparently simple boatman capped the envoy’s couplet by adding a further two lines:

Over that thousand years, Vietnamese poetry has blended indigenous influences with those of China and, from the middle of the nineteenth century, France, then Europe and America, to produce a distinctively national tradition of musical, carefully structured writing, whch is sometimes deeply personal and sometimes sharply political.

In August 1945, Vietnam declared its independence from French colonial rule. Complete reunification of the nation was not achieved until May 1, 1975, after further struggle not only against the French but also against the United States. From 1975 until the mid-1980s, there was a period of strict political and economic consolidation, which naturally had its effect on literature as well.

This is an original and exciting anthology of the newest Vietnamese poetry, written after the more easy-going “renewal” (doi moi) of 1986 had become a reality. It has been edited by a writer who is herself an important poet and closely in touch with the work of her peers. The collection includes a range of established and emerging poets, male and female. As Lady Borton has noted elsewhere, the themes of the writing of this present era are personal. They include “love, friendship, restlessness. loneliness, anger, resentment and forgiveness” (The Defiant Muse, 28).

The collection opens with the work of a major woman poet, Y Nhi. Nguyen Do and Paul Hoover have written: “Though very modern in tone and form, Y Nhi’s poetry also exhibits the tenderness, silence and sorrow of a woman who has experienced great sorrow in her life” (p. 97). The poem, “Longing”, ranges over traditional nature imagery, touches on the modern newspaper, then ends with the sudden despair of an abandoned relationship.

Y Nhi’s despair is present too in the work of Lam Thi My Da, who is also from Central Vietnam and an extremely distinguished poet. The absence of fulfilment is here, however, possibly (although not certainly) turned towards herself: “I had sown those seeds in a barren self”. The failure of love also characterises the work of Phan Huyen Thu, Tran Quoc Thuc and Tran Anh Thai. Here is the restlessness, sad complaint, and reaching out for comfort that is an enduring quality of Vietnamese poetry in both its oral and written forms.

Giang Van’s “Dying Day by Day” shines another light on this sorrow. Many of her poems have been set to music and become popular songs. There is an evocatively musical quality to “Dying Day by Day”, but there is also a melancholy indication that failures in relationships and the profound disappointment one feels within oneself are more than passing incidents: they are the little deaths that precede the final annihilation of the self.

Memory plays a complex role in this dying day by day. Ly Hoang Ly is both a poet and painter, who has held several successful exhibitions both in Vietnam and in the United States. Her poem “The Woman and The Old House” is indeed graphic in its description of a woman “dressed in a white tunic” returning to explore “an old house” that is now decaying. There are other women in the poem too: a crying baby and a young girl too. Is the child the woman’s baby grown older? Is the woman the child? We do not know; readers must make of the memories depicted on the canvas what they will.

The sense of “there but not there”, gone but still remembered, characterises Huu Thinh’s “Waking Up in the Morning”, and Huu Viet’s “Candle Poem” as well. Both are poems of melancholy recollection, of realisation that time is passing, love has been lost, yet somehow one must still endure. For Huu Thinh, love and death (“vengeance’s funeral”) are closely related. The shadow in which he sits is “that of a thorn bush”. But other poems by men are more vigorous and sexual. In the Preface to her translations of his work, Martha Collins has described Nguyen Quang Thieu’s poetry as being “a rare combination of exact observation and slightly surreal but always meaningful shifts of perception” (ix). This conjunction may reflect the influence of Pablo Neruda and other Latin American poets whose work he read while studying in Cuba between 1984 and 1989. Certainly it is an apposite characterisation of “July Reminiscence” where the couple on a wooden bed are turned into radiant logs of wood, with lives which “shine out through the blaze”. Through poetry, memory may yet survive annihilation after all. As Nguyen Chi Hoan’s poem, “Thoughts”, emphasises, the echoes do return, they are always “distant but close”.

Hoang Hung.has been described as “perhaps the most transgressive figure in contemporary Vietnamese poetry” (Nguyen and Hoover, xvii). His early work provoked fierce government media criticism because of “its darkness, solitary characters, and sexual references” (Nguyen and Hoover, xvi). In “Smell of Rain”, the presence of the lovers’ bodies close to each other under the relentless rain is shockingly compared to a “cow remembering its own dung”. The passionate excitement of physical love is also present in Nguyen Thuy Kha’s playful “Green Chilli”.

But, in the end, not all of the men are strong. Pham Ho Thu’s “Poem for a Discouraged Warrior Fallen from His Horse” is a metaphorical exhortation to a man who has a major weakness, an “Achilles’ heel”. The poem encourages him to rise up again and continue fighting, “Even though your old battle horse has run far, far away …”

Truong Que Chi, the youngest writer presented here, is more optimistic than her elder sisters. The lover may have forgotten “those memories/ But each day love grew stronger in my living orchard”. She concludes:

One day
I hope you will love me so much
That each seed will sprout
Green with every step
You take.

No matter how often relationships fail, annihilation is not the end after all. Memories may be dreams prophesying future healing and unity. The past feeds into the present and remains a part of it. Forgiveness is a precursor to new life, to resurrection.

Huynh Sanh Thung has noted that: “Translating poetry has always enjoyed a place of honor in Vietnamese literature … the three criteria observed by successful translators in the past [were]: fidelity (tin), expressiveness (dat), and elegance (nha)” (x). I salute the Spanish translator of this small anthology.

Huynh Sanh Thung: An Anthology of Vietnamese Poems: From the Eleventh through the Twentieth Centuries. Yale University Press, New Haven and London 1996.