But he had heard about the californium bomb
in the embassies Easter parties;
but he had donated half a liter of blood
for the anemia of the hospitals in the tropics;
but had read in Playboy
that Malcom X maintained that Jesus Christ was black;
but he had looked back on the mirror of his bicycle
half a million dead scattered in a horrible nap.

Sometimes walking on the streets under his canicular top hat,
he savored ice creams that were a pole of tastiness
and his greatest desire was to piss from the top of the Eiffel tower.

He did not have a wooden desk
but people said he had a writer’s timber,
he did not have a typewriter
but whenever he had it in him he wrote typewritedly
and when people listened to him they applauded as with gloves,
as with a single hand.

At school they made him memorize the Pascal’s Pensées
and he loved the bitterness of the philosopher.
He then switched Pascal for Pascale Petite
and bitterness for cannabis.

He never had ideals.
Ideals seemed to him diseases of the idea.
He had instead ideas of genius.
Like that one.

He ate popcorn
which were the only pops he loved for the moment.
he booed if the movies
were not according to his whims.

Only on Sundays he didn’t look at himself in the mirror
but at his photo published in the newspaper
and it was not because they were his that he thought
his poems were really worthy of him.

He had a police record as impeccable
as a perfect crime.

His parents threw up their hands in horror
looking at him receiving the broth from the sky;
his friends shook  his hands two or three times weekly,
there were always rubber shoe apostles at his table
and in the terraces of the city they asked for a dish of meteors.

He was a rebel against the fashionable walls
and his bed was the only ring in which to fight.
His bed with dancer foot legs,
with milking cows’s sheets
His bed as soft as the earth’s crust
when the earth was like an orange.
His bed with a microscopic fauna
where he devoured the morning biscuits.

His wife moaned under his feather weight like a balance,
under his weight and his presence of flamethrower in the night of hospitable thighs,
and he laughed as he put on her neck the black collar with stones of different colors
and his laughter broke the light orange crystals.

He was a useless poet and his name was Jotamario,
like Buda’s.

The Misfits Will Never Forget you Marilyn 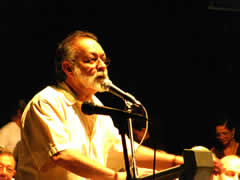