Find your own voice

The river turtle
does not breathe like
a slithering boa constrictor 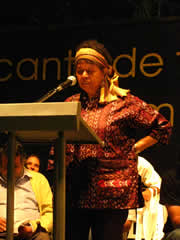 Jayne Cortez was born in Arizona, grew up in California, and lives in New York City.  She is the author of ten books of poems and performer of her poetry with music on nine recordings.  Her voice is celebrated for its political, surrealistic, dynamic innovations in lyricism, and visceral sound.  Cortez has presented her work and ideas at universities, museums, and festivals in Africa, Asia, Europe, South America, the Caribbean and the United States.  Her poems have been translated into many languages and widely published in anthologies, journals, and magazines.  She is the recipient of several awards including: Arts International, the National Endowment for the Arts, the International African Festival Award, The Langston Hughes Award, and the American Book Award. Her most recent books are "The Beautiful Book" Bola Press 2007, “Jazz Fan Looks Back” published by Hanging Loose Press, and “Somewhere In Advance of Nowhere” published by Serpent’s Tail Ltd. Her latest CD recordings with the Firespitter Band are “Taking the Blues Back Home,” produced by Harmolodic and by Verve Records, “Borders of Disorderly Time” and " Find Your Own Voice" released by Bola Press. Cortez is director of the films “Yari Yari: Black Women Writers and the Future,” and "Yari Yari Pamberi: Black Women Writers Dissecting Globalization.  She is president of the Organization of Women Writers of Africa, Inc. and is on screen in the films: “Women In Jazz” and “Poetry In Motion.”