Abel was so villain as his brother Cain,
When they were children they always played the war.
They hurt birds to touch smooth plumages
They dismantled bees
in order to eat sweet bellies
They grew as one is due to grow
With fear
With joy
And when his father Adam was murdered
Decided to take revenge for him they decided on the war,
A long one, as long as its own lives.

United by a strong bond
– It does not exist stronger bond than the rage –
They occurred to the task of suppressing enemies
Until the day in which they were alone;
It was then when they began to hate each other,
Abel jointed his men and retired to the mountains
Cain put fences to what he named his territory.

Then —all we know it already — the death was dropped in house of Abel,
Dressed camouflaged like all good death.

Today after another turn of the screw,
They speak of Abel´s roaming by the north,
Near the impenetrable ice;
They say he laughs with new roar. 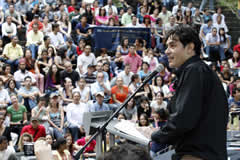