THE MEANING OF POETRY
IN THE PRESENT-DAY WORLD

To start with, it is good to remember that poetry is made with language.
More than any other literary text, poetry uses the ability of language that is called connotation - the ability of language to say more than one thing at the same time, in the same line, in few words, in a condensed manner.
There is more than one and only one meaning in a poem, poetry is always searching, always hesitating (a “prolonged hesitation between sound and sense”, said Paul Valéry) – always using the connotative characteristics of language.
This is the poetical use of language; we could call it the poetical dimension of language. And it concerns not only the writing of a poem but also (and this is very important) the reading of a poem. (Or listening to a poem.)

And the poetical dimension of language must be kept alive and defended.
Why is that important? I think it is important because it fights all kinds of one-sidedness, all kinds of unilateral thinking. Language and the use of language is a battle-field. All kinds of powers, financial, ideological and political powers are trying all the time to impose their one-dimensional meaning to words, chosen once and for all.
A poetical text, a poem, opens up this unilateral use of language, it is an important act of resistance to those powers that try to abuse language, try to impose their view, their meaning to the words, to the language.
And a poem is also very important because it helps the reader (or the listener) to become a creative user of language.
And that is the ultimate consequence of the poetical dimension of language: It helps to build a democratic community, it helps to build a multi-dimensional society.

But it's cosy, my house
Please
Have a seat
Don't be scared
We'll have a bite
Break the bread, sip the wine
Light a fire in the hearth

Look at
no admire the pictures
on the walls 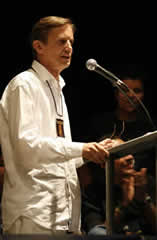 Sigurður Pálsson Born 30. 7. 1948 at Skinnastadur, Iceland. Studied French in Toulouse  and  Paris 1967-1968. Drama and literature studies in the Institut  d'Etudes Théâtrales, Sorbonne, Paris 1968-1973 and again from 1978-1982, obtaining maîtrise and  D.E.A. degrees. He studied also in the Conservatoire  Libre  du  Cinéma Français, obtaining a cinema direction diploma. Pálsson works mainly as writer and translator. He has also worked as professor (University  of  Reykjavik and the National Academy of Dramtic Art) and cinema producer. Sigurdur Pálsson  has  published  thirteen  books  of  poetry from 1975 to 2006.  Some of his poems have been translated  into  French, Swedish,   English, Danish, German, Bulgarian, Chinese, Estonian, Italian, Spanish...            Nominated  for  the  Nordic  Council   Prize  for Literature in 1993. Nominated for the Icelandic Literary Prize in 1995, 2001 and finally in 2007 for Minnisbók (Notebook from Memory) for which he got the Prize. Minnisbók is a memoir of his stay in France during 1967-1982, a playful, bittersweet, funny and charming description of an époque. He was awarded the annual Literary Prize of the Icelandic Radio 1999 and the Booksellers' Prize for Poetry, 2001. Selected poems were published  in  French in 1993 in a bilingual edition (Poèmes  des  hommes et du sel) by Editions de  la  Différence. A selection of Pálsson’s poems was published in Bulgarian in 2005 and in Italien (with texts by two other Icelandic poets) in 2006. A selection in Spanish (Vientos y nubes) was published in 2008.            Pálsson has written eleven theatre plays that have been staged from 1975  to 2008, many of them by the Reykjavik City Theatre while the two most recent ones, a much acclaimed play on the life of Edith Piaf, and the last one (Utan gátta), were put on by the Icelandic National Theatre.)
One libretto: "The Moonlight Island", world premiere in 1997 in Beijing. Music by Nordic Council Prize Winner, Atli Heimir Sveinsson. Three novels: Parísarhjól (The Big Wheel of Paris) published in 1998, Blár þríhyrningur (Blue Triangle) in 2000 and Næturstaður (Night Lodging) 2002.    Pálsson has produced two full-length features (in 1983 and 1992) by Kristín Jóhannesdóttir.  As in heaven  was selected in  the  Official  Selection (Out of competition) in the Cannes Film Festival in 1992  and has won about twelve prizes in international  film festivals. He has directed three TV films and several theatre plays. Pálsson has translated over twenty titles from French into Icelandic, works by Camus, Genet, Adamov, Arrabal, Ghelderode, Feydeau, Bailly, Queffélec, Prévert, Éluard, Carrère, Augé, Deforges, Cordelier, Châtelet, Vinaver, Anne, Kvaran and Schmitt and also two plays by Arthur Miller.               Sigurdur Pálsson was President of  the  Alliance Française of Iceland from 1976 to 1977. Chairman of the Writers' Union of Iceland from 1984 to 1988.  He was awarded  the  three   years   Honorary Stipend of the City of Reykjavik in 1987 and  has  several times been  granted  a  Writer's Stipend from the State of Iceland. He was made a Chevalier de l'Ordre des Arts et des Lettres in 1990 by the French Minister of Culture and Chevalier de l’Ordre National du Mérite in 2007 by the President of France.