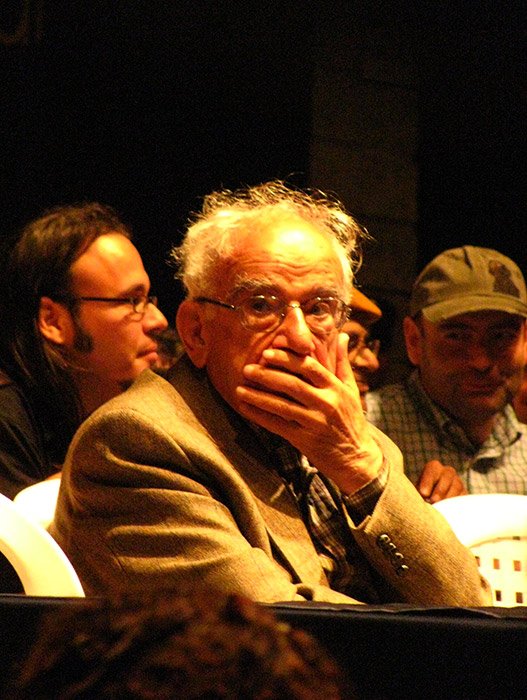 What happened
to the wood gatherer?
In old times he used to sing
like a bird on the shoulder of a mountain
early in the morning.
And today he doesn’t  speak,
he became mute
like a stone in a cave.
Who knows? Maybe he got tired.
When the river gets tired
it loves the flat lands
and the darkness of the sea.

Time is a reliable watchman.
He never tires,
Never retreats,
Never gets old.

Throughout the ages,
Every moment he rings the bell
Wakes the body
Sets it on the path.

In the beginning were the elements
and there was love,
so they mingled.
They became an olive tree
And God called it Hiroshima.
Beneath it, He rested.

At winter’s end
God said to himself:
Spring has come,
I shall head to the fields
for the hoes are warm
and desire shudders beneath the soil.

Ages passed
while God tilled the earth
spreading seeds,
gathering the ripened crops.
Into the jars
he poured wine and oil.

When reaping was done
He saw that all was good.
He said:
Now is the time for rest.
I shall go to the olive tree
for its shade is dark and vast.

On the way
He smelled smoke.
He looked up
and saw the olive tree burning:

an umbrella
a mushroom sprawling out,
dust blotting out the faces,
and on the waters, the winds of Sodom.

BETWEEN VILLAGE AND CITY

Long ago
there was travel.
Provisions for the road were the rooster’s crow
The birds of the twilight haze
The walking stick by day
The bonfire by night.

And now
In the steel carts
And the plumes of speed
The leaves of the senses are withered
The body’s windows are closed.

Between the blows of one axe and another
The songs glow

Across memory’s stage
Faces pass by
Behind an iron curtain
They spin spider webs.

But from within the body’s darkness
At the sacred moment of silence
One face peeks out,
Approaches,
Settles in the eye,
And in the heart’s sky,
Becomes the stars.

Far away from the gasps of chimneys
and the fume clouds
Here in these mountains
he cooks roots
and dresses in greenery.

Which is the dream?
Which the reality?

Not from hunger
not from thirst
not from cold
not from love
not from sickness!
From the wafting breezes of poetry
this pallor,
my friend.

Borders,
Check-points,
Barbed wire,
Passports.
And yet to the ends of the earth
Without any walls
The swallow crosses over
The fox roams about.

You build endlessly
Your house within us,
Stone upon stone.
You soar like leafy distances of trees
Searching the sky’s edge
And you glow
A green star in green air.
Our hands adrift
We sleep.
Still
Weaving through the groves of night
You thread our world
With feebleness
O God of Time

Endlessly you aim
Towards a star
Towards the pages of the poem
In your eyes, a cloud
From the paintings of the deep
From a new land.
But life tightens around you
And the poem
Forever tempts you
And the lantern is broken
Timeworn.

Since days began…
To his fields every morning
His shirt, the wrinkles of earth
His shoes, the cracks of time

Since days began…
To this house every evening
On a wooden chair
Holy bread and wine.

Between them the curtain rises.

From the bottom
Of a pond in the wilderness
A flower rises,
Beneath the sun
On the pond’s surface
The eyelashes unfold
An island for the bees

He stumbles.
He looks at his fingers,
at the furrows in his hands,
at his cane.

In his creaking joints:
a thirst for sun,
for fire in the hearth.

In the oak tree of his life
leaves abound.
He counts them,
embarrassed by friends who have passed
and all the grandchildren.

Years upon years,
at the feast of death,
and he doesn’t die.

POETRY OF TRANSFORMATION AND TRANSITIONS

Long  ago, a Greek philosopher called Heraclitus said, “in the same river we step and do not step”. By this statement, Heraclitus expresses his view of the nature of reality. As it is the case with the river that its water flows constantly, and is constantly replaced with new water, so is reality in permanent change. The same principle of change applies to the history of mankind. At present, the validity of this principle is most obvious. What we learn today, we have to forget tomorrow, due to the hectic discoveries and inventions, or else we would sink into backwardness and primitivism.

What is the cause of all this hectic change? Its cause could be traced back ultimately to the collapse of the metaphysical tradition.

What has been the role of metaphysics? Throughout its history, the metaphysical has been considered the foundation of the physical. In its light, the universe has been given a purpose, the events of nature have been explained, all questions have been answered, and the human life has been guided and evaluated. In this sense, metaphysics has been the castle in which man used to feel protected against all danger, even the danger of death.

But as Heraclitus states: nothing is permanent except the law of change itself. Gradually, the metaphysical heaven started to embrace heavy clouds. Its stars, its moons and its suns became dark and darker, from the north, the cold winds started to blow, and finally night and more night started to fall on the surface of the earth covering its rivers, valleys, plains, mountains, everything including the metaphysical castle.

What factors initiated the cold winds of the north that extinguished the flame of metaphysics and its light? Several factors, most important of which is the scientific revolution based on the principle: Back to facts. This principle implies that knowledge in its absolute sense is established on the ground of the factual. Only the factual is real, and so the true object of genuine knowledge. As such, the scientific revolution has conduced to the general conviction that the metaphysical sun, being metafactual, has started to loose its validity, its warmth and its light. As a result, the metaphysical had to be replaced with the physical, the heavenly with the earthly, and the omnipotent God with the “omnipotent” man, manifesting his “omnipotence” in his absolute self-assertion, in the form of hectic struggle for the conquest of the earth and its cosmos.

The danger does not lie only in the invention of the most destructive weapons, nor only in the outbreak of irremediable diseases, nor only in the distortion of the beautiful and mysterious face of nature, nor only in the possibility of the most inhuman wars. Surely the already mentioned factors, and still others, form possible sources of danger. But the real danger lies in the possibility of getting conditioned to the belief that reality is confined within the walls of the factual, of what could be calculated and measured, forgetting by this belief that mysterious horizon which encompasses everything, without being itself the object of calculation and measurement.

How to avoid this most dangerous danger that knocks at the door of the modern man loud and louder? Answer: when the man of this modern planet learns how to listen to the silent language of the mysterious horizon that escapes every possible definition. A distinctive way of doing this is the poetic word.

Strange! How can the poetic word perform this most difficult and complicated job? How can such a word, so fine and so transparent, be the rescue? What is the poetic word?

The poetic word speaks. Its language transcends all linguistic rules and regulations, all political –social- moral engagement, all transitional – emotional experiences of the individual, and all kind of occasional entertainment and amusement. The language of the poetic word is unspoken, it is the silent language of the mysterious horizon. In its silence, the mysterious horizon continues to speak. Throughout the seasons, it keeps whispering, winking to the passers – bye. But the majority are deaf and blind, overswept by the loudness of the market and the haziness of the daily existence. Of the few who have sharp ears and pure eyes to hear the whisper and see the sign is the poet.

At this point, we seem to have gone astray, namely to have deviated from the main direction suggested by the topic of this discussion, which is: “Poetry of Tranformations and Transitions.” This deviation will turn to be only apparent, if we try to remember what we have done so far.

Our starting point has been Heraclitus principle of change, that this principle is most obvious in the modern times, that its cause in the modern times is traced back primarily to the collapse of the metaphysical castle, that the collapse of this castle is mainly the result of the scientific revolution based on the cult of the fact, that the cult of the factual sends the mysterious horizon down into the darkness of memory, and finally, that the poetic word uncovers the mysterious and reminds the modern scientific eye of its existence, thus saving it from the suffocating smoking of the factual rituals.

Centuries ago, a German poet called Hölderlin must have felt the pending danger imminent in the modern times. In a poems called “Patmos”, he says: “wo aber Gefahr ist, wächst das Rettende auch.” Translated in English: “But where there is danger, the rescuer grows up also.”

The rescuer from the smoke of the modern cults of the factual is Poetry. 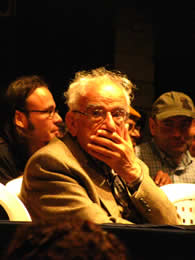 Fuad Rifka  born 1930 in a small village in Syria studied filosophy in Beyrouth and got a doctoral degree in Tübingen/Germany. Rifka is one of the most importent innovators of modern poetry in Arabic poetry. Although he is a great connoisseur of Western, especially modern German poetry and translated poetry by Novalis, Hölderlin, Rilke, Trakl, his poetry is always flavoured with  a metitave, Oriental  perfume.  His poetry has been published in French, in English, in German (Heiderhoff Verlag).