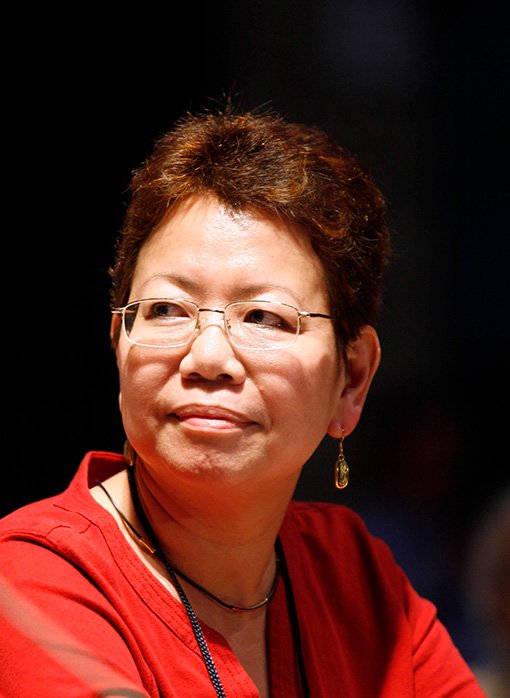 CROSSING THE STREET WITH MOTHER

Holding her close
to say good bye every weekend
I feel her eighty-two year old lightness,
bones delicate as her thin cotton dresses.

Yet every night over the phone she regales me
of her forays into shopping malls, alone;
her encounters with shopkeepers in Kalentong,
pickpockets seated across her in jeepneys.

I still fear her peremptory voice, the rattan rod
she wields, even as she holds on to me tightly
as we cross Shaw Boulevard, her walking pace
as measured as these roles we persistently play.

She cooks her different ways of chicken---
adobo, jamonado, stuffed with lemon grass,
steamed. Every Friday she asks me, how do you
like the chicken cooked? I tell her not to strain herself.

We take her out to Sunday lunch, and she
hardly eats. She wants nothing of this eating out
when she can cook better, and yet I see how she goes
about the kitchen now, handling cleaver and knives.

These days when I see her white hair, bright eyes
(both lenses new, post-cataract surgery), I let out
a little hope that she might have learned to see me,
no longer the girl who said “no” to her every request.

And because crossing this street is a task
she dreads, I hook an arm around her waist, and she
reaches out to catch my hand. We are not in a hurry.
The other side of the road seems no nearer.

I inhale the scent of her hair, wishing to tell her
we can walk on like this longer, longer than she
can hold me, as we mold fragility closer: her rebukes
silenced, and my own heart, hushed.

Hovering over fringes of sleep
images skitter like water bugs
on the mind’s surface.

Time trembles.
Within the water’s depths, Wu,
the nothingness, is understood
as simply being in the moment,
flowing, like the smooth movement
the shoulder makes, as the foot,
malleable as dawn, pivots
to an empty position.

Lightning flashes, cymbals
announce the coming of warriors.
Nothing seems impossible,
as body hurtles through push
and pull of wakefulness,
birdsong winding its melody
around fluttering lids,
the mind seeing what it sees,
because in a second
the moment is gone.

Graham crackers are crushed
accretions of long silences
we tamp into smoothness
lining this Teflon pan.
Knobby hands scrape lemon peel
for zest. When had her joints
become so large, the fingers
misshapen?

As the crust bakes I put flour,
butter, sugar, eggs, juice and zest
into the blender. Above the din
she exclaims how different it was
during her time, when custards
were mixed by hand.
Smoother curd, she insists,
as Oster blades cut though
sweet tartness, or tart sweetness
whichever is predominant today,
fear and willfulness mingling,
two women in so many ways similar,
yet loathe to see their own selves
in the other.

Giving in to her wishes I whisk
egg whites for meringue with a fork,
the bantering between us light,
soft peaks rising. Teaspoon
by slow teaspoon she adds
sugar, poking a finger into the bowl
and puts frosting into her mouth
and chin. We laugh aloud,
mirth reaching out across
this expanse liberally strewn
with landmines.

The room explodes with smells
of baking pie. In the oven,
perfect swirls turn golden brown.

It should be a torso movement,
the Tai Chi master said,
never only the hands.

I raise one arm, elbow gently flexed,
open palm before my eyes,
while the other arm comes down
in a gentle arc of shaping the wind.

Turning slowly to the right
my eyes catch low clouds
settling halfway down the mountains,
slopes gentled by morning sun.

Look at Infinity and be aware of the Now.

Right, then left; up,
and down; the mountain fog
seems to echo my movements:
Who is following whom?

The answer lies in the Nothing.

It is enough to be here, be one
with the mists, the pearl-gray skies;
to move and yet
be still.

One day I shall remember this:
the stillness of a late afternoon
in Prosperidad, an affluent district
twelve minutes by subway train
from el centro de Madrid;
the sudden shuffle of feet
and voices from the next apartment;
the sun, still high at six thirty,
shining through ivory-colored lace curtains,
reflecting the six-story yellow whiskey advertisement
from across the street.

Stretched out in the living room divan
I am cocooned, shoulder to toe,
in your eider down blanket,
its dainty gold feather prints silky
in the coolness of early spring.

Ian McEwan's Amsterdam  is on the shaggy carpet,
Paul Bowles' The Sheltering Sky, too, half-read,
stories on journeys half-finished,
characters undone in passion and grief.
Glancing at the clock  on your wooden bookcase
crammed  with volumes in Castillan,
I realize it is time to prepare dinner;
my sense of the present all askew
because of the sunlight, and all loathe
to leave the softest of feather downs,
your roof above my head.

“Una Furtiva Lagrima” drifts in from the window
(song, and the smell of fried onions)
which opens into an airy central courtyard
where shirts and sheets stir in the clotheslines.
Padding around the kitchen in my cloth slippers
I wash the jasmine rice purchased in Tetuan,
measure the exact amount of water.
I can almost hear your keys
at the back door, clattering; your voice
singing, "Hola! I smell rice, cooking!"

I shall remember April in Madrid like this:
day bright at seven in the evening, early spring
bringing a soft edge to waiting, a blurring
of distances, and rice cooked to perfection.

Where do we walk today, you ask,
spreading out a city map
creased and partly torn.

With you, one is a child again,
in that city by the Guimaras Strait.
Images are freeze-framed:
of you and Father laughing,
voices ringing out above
long concrete stairs leading
to photographic studio,
former home that now
houses the skeleton
of a shopping mall.

Thirty years lost between us:
we need a map, surely.
How could the decades
have unfolded as they did,
surprising us at every bend,
our paths converging, deviating,
opening, ending at intersections
more complex than Metro signs
at the rotunda of Gregorio Marañon?

Don’t lose your way now,
you say with a laugh,
knowing how in this place,
and space, one could easily get lost:
missing a train transfer
at Plaza de Castilla or losing
one’s bearings at the flowered
roundabout of Marquis de Salamanca,
body and as readily, heart: running
breathless, on edge,
loathe to keep you waiting.

(after a visit to Lunghou, Chinkiang, China)

I meet her eyes shyly
half-afraid of seeing
disapproval there.
Will, she, even for a moment
wish, that the thousand li
could be breached by this
stranger of a granddaughter
speaking in a halting tongue
the language of a common forebear?

I kiss her cheek
and she is taken aback.
This intimacy a surprise,
a gesture most alien to her,
and she pulls herself up
to seemingly tighten her cloak
of imperiousness around her
protectively even as my spirit
strains and reaches out to her.

I watch silently, wide-eyed,
as blood surges and boldly
speaks out with sureness
even as I falter in speech,
feeling this oneness with her,
this delicately-stooped grandmother,
bound to the earth in her
small, small feet.

I feel this kinship, mute
but irrevocable, as we sit
together and gaze out into the
rows of spindly trees bereft now
of leaves, as the cold and icy
blasts of wintry wind
from the Lung Lake make me
burrow into my unsubstantial coat.

…shadow
is a continual flow
in the soliloquy we weave
within ourselves…”
Charles Tomlinson
In Memoriam: Ángel Crespo

In this coffee shop I await my flight home.
Trying out the latinate words in today’s
El Pais, I roll the erres, exaggerate the jotas.
But the utterances ring hollow in a shadowed
stage, a monologue of  “Who could he be,
this man who turns my life inside out?”
(conjugated in the futuro simple, you said).

For weeks on end, I mangled reflexives,
tortured infinitives, adjectives tussled
with adverbs, discordant, each entangling
the other like carnelian beads at the Quetzal
exhibit near the fountains of Plaza de Colón.

Amidst the bustle of Barajas I remember
that afternoon when we read silences of Mayan
hieroglyphics, touched funeral urns and jaguar
masks above altar stones. Obsidians, like black
teardrops, glinted inside lighted cabinets,
and men with steeple-shaped  heads faced death.

In my valise, your silence lies heavy. In any
language, distance is the shadow we embrace,
in the soliloquy that we translate, day after day.

Alice Sun-Cua  Poet and physician, Dr. Sun-Cua is a practicing obstetrician-gynecologist at the San Juan de Dios Hospital and at the same time, a poet writing in English. She has published a collection of poetry, Charted Prophesies and other Poems (DLSU Press, 2001) which was short-listed by the Manila Critics Circle for the National Book Awards in Poetry in 2002. Her book of travel essays, Riding Towards the Sunrise (Anvil, 2000) won the National Book Award in 2001. She is a founding member of the ALON Poetry Collective, a group of DLSU alumni who meet regularly to workshop their poetry while continuing to foster camaraderie and support in their writing endeavors. In 2003, an anthology of their poetry, What The Water Said (Libro Agustino) was published, which won the National Book Award in 2004 for best in Anthology. In October of the same year, 2004, Gather This Voice: A Multilingual Poetry Anthology of the poems of renowned Orihuela poet-martyr Miguel Hernández, translated into six Philippine regional languages, was published. Dr. Sun-Cua was a poet-translator in the Hiligaynon panel. In 2002, she graduated with a diploma in the Superior Level (Nivel 18) from Instituto Cervantes de Manila and in 2007 passed the language proficiency (DELE) exams for the Intermediate Level given by the Ministry of Culture in Madrid. Since 2006, during the Spanish National Month (October) she participates actively by writing movie reviews of the Películas, a series of Spanish movies highlighting its culture and modern trends. She is now translating Las personas del verbo, a collection of Spanish poetry by Jaime Gil de Biedma with a grant from a cultural foundation in Madrid, working closely with Mr. Jóse Ma Fons Guardiola of the Instituto Cervantes, to be published by Vibal Publishing, in 2009. In 2008, Dr. Sun-Cua published her fourth book, The Transition Years: Perimenopause in Filipino Women, a study of perimenopause and its effects using a culturally-validated questionnaire, to good critical reviews.She speaks English, Chinese Mandarin, Fookienese, Spanish, Tagalog, Hiligaynon, and Cebuano, She is a regular panelist for the MFA Creative Program of DLSU, and her poetry is being published in the poetry sections of local magazines and international anthologies. She suffuses her literary work with the humanism that comes with daily encounters with her patients, their problems and suffering, melding literary art and medical science into one --- to share, to help, and ultimately, to heal.