We are laid bare by the night and every flight sticks to us.
Our hands have been left open
To prove that winds have lost their way.
You can hear this ragged vibration. Yes, it’s ours and
It’s better left unnoticed.
We are as blurred to the gods’ sight, as they’re to ours.
We walk around dressed in burned needles; we exhaust the primal eye,
But what’s the use of saving memory
When there’s merely wind and water evolving
In the budding process of inviolable beings.
Memories raised light as a primitive boundary.
There will be times when fire or snow shall fall upon us,
To single us out
From whatever laid between the sky and the crown of utter collapse.
No one has unveiled our fellowship,
For we speak an encrypted language.
Between rough mist and handless beds
We carry the wax invested chimera firmly tied to our back.
This morning the dust flew up,
I catch a glimpse of that kind of continuity that appears at dawn.
A reachable time from which you emerge with whistling feet towards the houses,
To go in and out of them, to knock on doors while they open
And no one’s there.
While they knock again, doors open once more, and still no one in sight.
But someone makes calculations, additions, and subtractions
With those helpless knocks and finds
That the messenger was covered
By sea constellations and venomous rings.
He calls the lines when he sees
That the hands of heaven are based on retentions.
He and we form only one chain, this unique chain bound
With angels who grow downwards and pay tribute to the wood,
With genital spirits who mark their territory with zinc oxide.
In cave walls, now thresholds are different,
Like water that is suddenly undeceived
Some kind of renegade magnetism poses as our disguise.
We dip our weapons in leprous sparkle
The space we fill in this night turns into fog.
Fog that covets our body fragmentation.
It is better to ignore that our roots
Have fallen into the oblivion of mistaken skies,
That at birth we interrupted those snakes,
Mere tools of the tempest.
It is better not to have memories; they all lived under a guilty lamp.
The submersible part of the sea was first created in the sky.
We look back and see how the glow brings down a row of days.
It’s quite another look, just like that of a man staring at himself on a woman
When he discovers that he has been living with lightning,
That he takes blood down an invisible path
With the key that punishes stones, so that light is left alone with death.
He finds he has stirred birds and mirrors so that hell could grow old
He finds he has covered in breeze the sexual tree which takes the place of death,
And he finally sees that two tremors are forever facing each other. 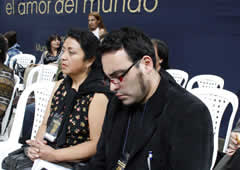