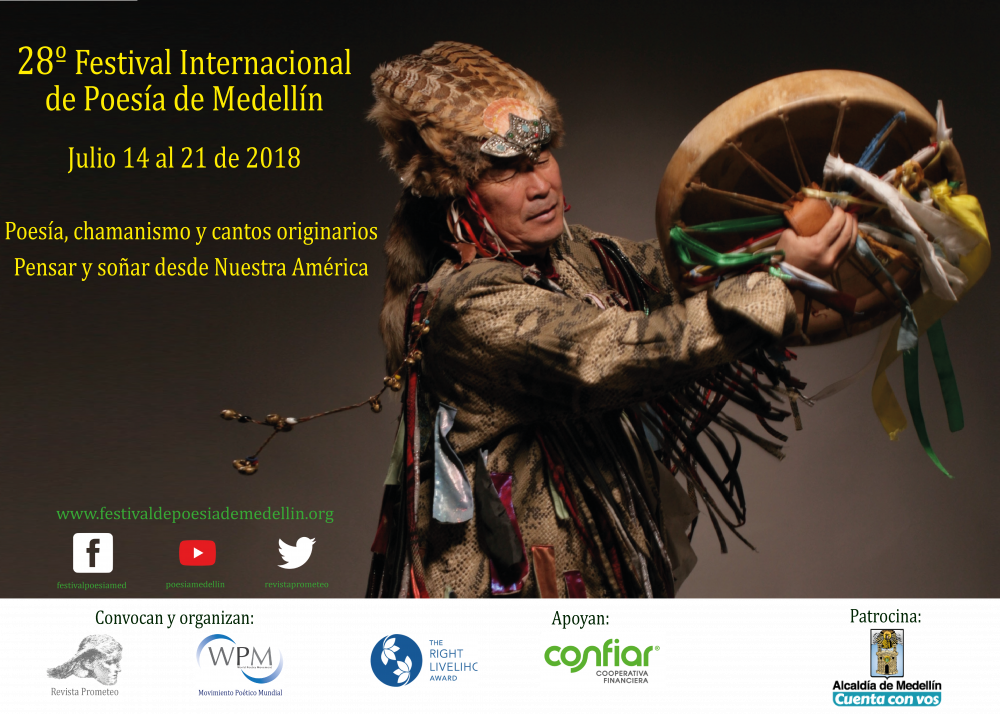 There is a music that invades me incessantly,
it is poetry, the music of the soul
Rita Mestokosho (Innu Nation , Canada)

With the 28th International Poetry Festival of Medellin, to be held from July 14 to 21, 2018, we will celebrate the advent of the voices and the visions of native peoples, which will enable us to think and dream from Our America. We will celebrate the aboriginal presence alongside with the people that have been at the crossroads of violence; the people wounded by fratricide, but also those human beings that will be healed and transformed by their active hope, secure in their love for poetry.

Poetry is the song of the ancestral peoples, it intertwines us with the first sound, with the vision and the experience coming from the sources; their word, their memory and their knowledge will give us the keys to face the reality of present-day realities, in a chaotic vector of destruction on a global scale. In this regard, the thinker Noam Chomsky has affirmed: "The most advanced countries are leading the way towards disaster, while those we call primitive are trying to save the entire planet. And unless the rich countries learn from the Indigenous people, we will all be condemned to destruction. "

Now is the time to listen to those whom this civilization, sustained by barbarism, has silenced and exterminated. It is the time to celebrate the advent of the voice that will bring us the modulation of the origin, the voice that reminds us of the supreme alliance of the power of myth with the forces of triumphant life.

Among human acquisitions, mythical thought has been the greatest ally of life on Earth. The power of symbols becomes a thousand-year-old presence in the life of the Aboriginal peoples, providing us with a collective perspective, the triggering action of the powers that will give new meanings and sense of existence.

Since the origins of the International Poetry Festival of Medellin, the presence of poets and shamans from indigenous peoples has been essential. Their participation has enabled a deeper and broader notion of the poetic experience. This community is the one that gives a deep meaning to the Festival, with its assistance and lucid participation, it intertwines with the ancestral powers, the gifts of the authentic oral tradition, and ritual singing, expanding their domain and enriching life experience.

The Festival will be the event in which the Aboriginal peoples express their perception of the world, their cosmologies, their claims and their suggestions as cultures that have a millennial wisdom, which is so much respectable and needed in our time. As Henry Miller expressed in his book The Time of the Assassins: "The original peoples are in general poets of action, poets of life. If we were sensitive to the poetic, we would not remain insensitive to their way of life; we would have incorporated their poetry to ours, we would have infused in our lives all that embraces theirs.  The poetics of the civilized man has always been exclusive, esoteric. It has caused his own death. "

Colombia, Latin America and the entire world require urgently to overcome the pathological individualism to which we are condemned by the role of current life, inscribed in the global economy based on the devastation and the extermination of life on the planet. Indigenous peoples are the most authorized to disseminate communal ways of life and thus make a great contribution to the new generation in a structural sense to a harmonious coexistence, for the benefit of the much-needed human, mental and environmental ecologies at this particular moment in time in Colombia and the world.

We conduct this call from Medellin, a Latin American city; and it is our reason to address another important aspect, essential and relevant, as a thematic area which we have called "Thinking and Dreaming from Our America".

Our America, the expression that was immortalized by José Martí, is the sovereign conjunction of myth and utopia, for the work of the Amerindian peoples. Poetry is its Millenary feat, poetry is their struggles, their resistance, their amazing crucible gift where a new life reverberates, the reality sculpted by the hands of hope that still survives in the human adventure. Here, the weight of the imagination and of the dream gives form to this polychrome made of a wonderful ethnic and cultural miscegenation which characterizes us.

Where is our Latin American tragedy, where is the horror to which a large number of the inhabitants of these lands are subjected with their violated bodies, given the terrible conditions of their lives, their subsistence, their lost dignity? What is going on with the scorched earth, what about rivers suddenly disappearing, with endangered-species? What of all those ethnic groups that have been decimated and that yet are doomed to the hunger, to the abjectness and to the brute force of the plunderer capital? What of all those ancestral languages ​​that have disappeared and those that are in danger of disappearing? What about the problems that rot away Latin American existence? What about the galloping alienation, induced by the role of the globalized capital and its impact on cultural identities, what about social confusion, and us finding ourselves adrift?

It is urgent to rescue the thought and the poetry that feed the renovation and the integration of our spiritual, cultural and social forces. It is urgent to keep alive the memory and the assessment of the founders of our destiny, managers of a radiant future, full of achievements, and dreams that have to be fulfilled.

It is about a whole subcontinent that should be clear enough about its origins, its history, its tearing; along with all that, we have  a great inheritance, a gathering momentum towards a renewed life that has as its axis our common roots and destiny, our poets, thinkers and artists who have visualized this land and its people as the period resulted in the emergence of a new culture, liberated from its secular yokes, open to the future for new generations.

In this perspective, 25 poets and shamans of the ancestral ethnic groups of the world will intervene with their songs, rituals, conferences and conversations. One hundred poets, artists and thinkers from the five continents will participate together. In this sense, scholars will converge and feed the collective conscience with their visions and clarifications, by enriching the contents and themes proposed for the Festival.

Within the 110 scheduled activities, there will be 30 in the area of education, such as courses, workshops, discussion groups, panels and conferences, in the context of the 22nd International Poetry School of Medellin.  Musical groups will also give presentations. For instance, Su Yang rock group, from the People's Republic of China, will be making a high standing contribution with a proposal in which they fuse ancestral songs to the sound of Rock.

Let this be a loving invitation to participate actively in this event, which invokes the sensitivity of the peoples and of all those working for the construction of peace with social justice, healing and enriching life, language and a culture of life, and looking for coexistence in peace and reconciliation.