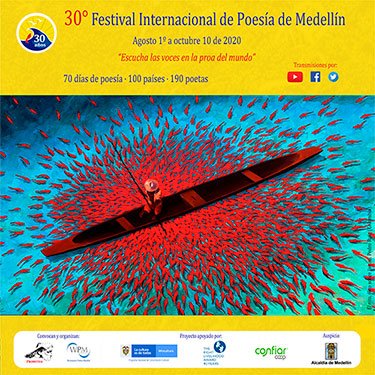 With the aim of exploring the initiative to broaden  poetry among human beings in their gravest hour, fighting the fear, the pandemic and death, and conduct a refreshing dialogue between poets, artists, academics, scientists and the laureates of the Alternative Nobel Prize in order to elucidate new avenues on the unresolved problems of human society, we str celebrating the early thirty years since the foundation of the Medellin International Poetry Festival that will be fully implemented for 70 consecutive  days, from 1 August to 10  October 2020, with the participation of more than 200 guests from 103 countries in all world regions, with over 130 activities, an unprecedented virtual conference in the history of world poetry.

With extreme difficulty, through a confluence of pandemics, and in addition to this, owing to the circumstances of the chronic Colombian warfare, the hostility from the nation´s circles and the media and for the refusal of financial support and financial blockade by an overwhelming majority of official institutions and companies during the three decades of its existence, the Festival bursts as an alternative to withstand perverse pessimism, the noise of chaos and the sophisticated machinery of death in human society, as well as the suicidal drive of history with the aim of injecting the dream and confidence of the individual and of the peoples in shaping their own destiny, within the miracle of nature and existence, to contribute to the solution of problems everywhere in the world and produce results through the process of reflection.

Poetry is self-awareness for releasing human energy, a complete overview to all questions and answers throughout history, the lightning that enters invisible territories into the weary eye of the world, the sensitivity that repudiates and transcends all borders, the supportive love that dissolves the walls of the confinement to embrace the human species in its full potential of uprooting, in the way of the search and discovery for awakening through persistence the powers of the human will,  the irreducible spiritual revolution to quench the insatiable thirst for infinity at the heart and the conscience of humanity.

The Festival include individual and collective poetry readings, interviews, meetings with guests and roundtables with the guests, concerts, panels, courses, and workshops, which are being enjoyed for the first time from anywhere in the world, and developed from the digital network with a capacity for 500,000 spectators, who are being able to engage and interact in many virtual spaces with the invited poets and artists. The events held are being broadcast live through the Festival web pages and the World Poetry Movement – Movimiento Poético Mundial- web page (www.wpm2011.org) as well as through some social networks: The Festival's Facebook page (festivalpoesiamed), Youtube (revistaprometeo) and the World Poetry Movement, through their Facebook pages (worldpoetrymovement2011) and YouTube (World Poetry Movement).

The Festival program includes courses offered by the 24th Poetry School of Medellin with free access for those who use and submit this form. The poets who offer these courses - in Spanish - are Rocío Cerón (Mexico), Luís Filipe Sarmento (Portugal), Stefano Strazzabosco (Italy) and Rómulo Bustos (Colombia). Poetry workshops will also be held for boys and girls in all of Latin America during the activities of the Gulliver Project, in the context of the Festival.

The realization of the 30th International Poetry Festival of Medellin represents a vigorous symbol of human hope and a clear proof of the creative power of poetic language which nourishes and constantly accompanies the human spirit, in such a turbulent time besieged by the pandemic, nuclear tensions and ongoing wars, the material and spiritual misery of hundreds of millions of people and the irrepressible drive of hatred and despair that is progressively gaining currency throughout the world.

The Festival is sponsored by the Mayor's Office of Medellin, the Ministry of Culture of Colombia, the Foundation of the Alternative Nobel Prize (Right Livelihood Award), and the Cooperativa Financiera Confiar.

Detailed information -in Spanish- about the work of each of the guests can be seen at this link.