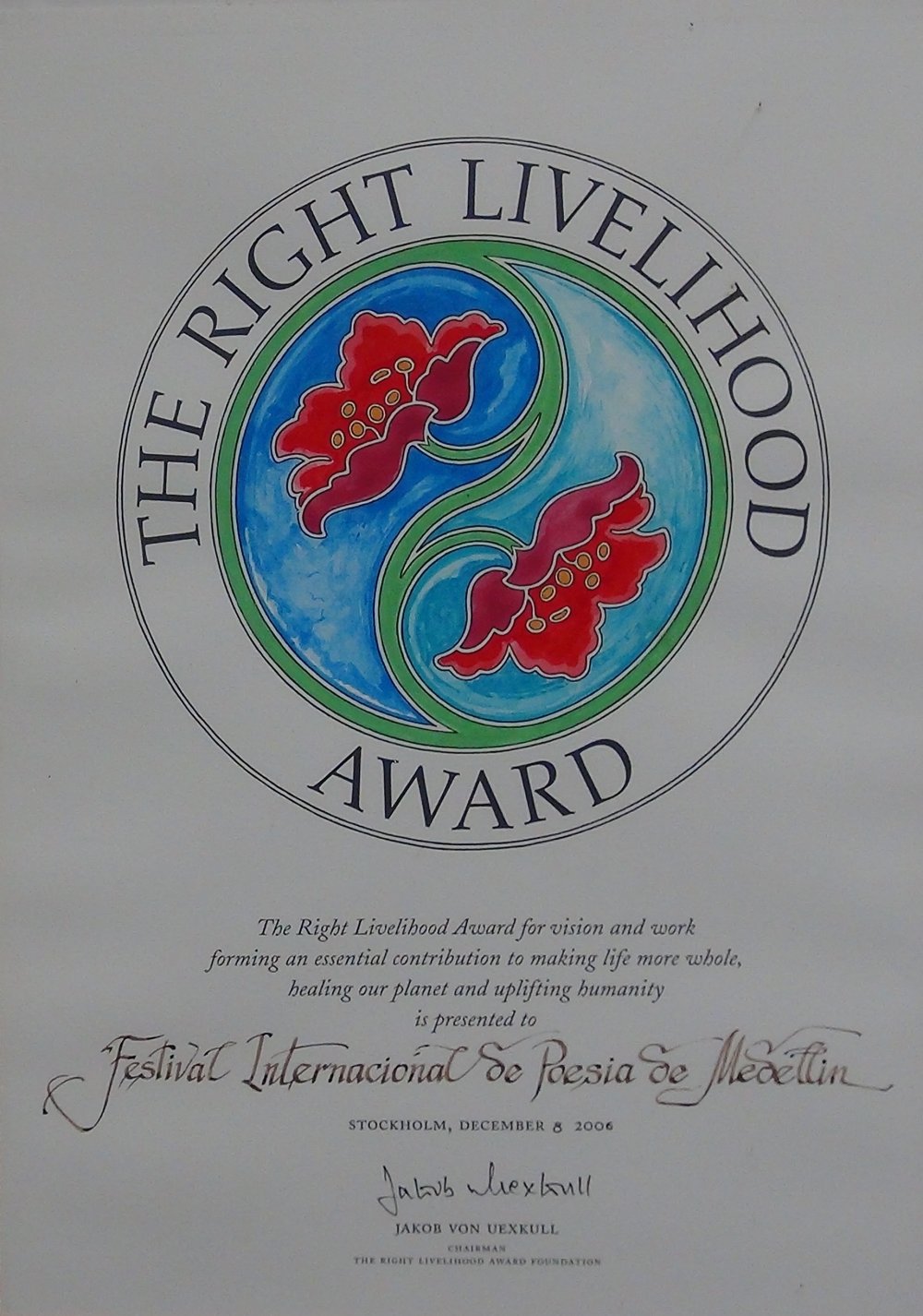 "for showing how creativity, beauty, free expression and community can flourish amongst and overcome even deeply entrenched fear and violence"

A delegation from the Medellín International Poetry Festival, made up of Fernando Rendón, Gabriel Jaime Franco and Gloria Chvatal, received the 2006 Alternative Nobel Prize at the seat of the Swedish Parliament, in Stockholm, on December 8th past.

Before and after the ceremony this delegation met with the speaker of the Swedish Parliament Birgitta Sellén, and with a number of members of parliament from different political forces within Sweden, including Bodil Ceballos, Eva Selin and Kerstin Lundgren, as well as the Green member of the Euro parliament Carl Schlyter whom we updated regarding the serious political crisis which is deteriorating our country, due to the investigation being carried out by the Inspector General of the Nation against 40 members of the Colombian government for their links with paramilitaries, which has had a direct political impact on the President of the Republic, Álvaro Uribe Vélez, and his chancellor Consuelo Araújo.

In Uppsala we also met with Henning Melber, the executive director of the Dag Hammarskjöld Foundation, whom expressed his preoccupation and sorrow due to the tragedy which the Colombian people have lived through for decades.

Fernando Rendón, Festival Director, carried out an agenda of interviews in Berlin, with the Vice-president of the Bundestag -German Parliament-, Mr. Wolfgang Thierse and with the member of parliament Monika Griefahn, among others, who were profoundly interested in understanding the origins and nature of the Colombian conflict and in finding out how the German Parliament may help towards its definite solution.

Both the Swedish and German Parliaments are working to set up multi-party commissions, which will come to Colombia to attend as witnesses the XVII Medellín International Poetry Festival, which will be carried out between July 14 and 22, 2007. They will then go to Bogotá and other cities throughout the country to meet with the countrys political and social forces, and with Human Rights organizations, in order to form first hand impressions regarding the true situation that exists in our country.

In Paris, Fernando Rendón met with Mrs. Danielle Miterrand, director of the France-Libertés Foundation, who promised to do her best to attend the upcoming Festival.

The Festival delegation held interviews with many different media outlets, journalists from news agencies, TV networks, newspapers and radio broadcasters, and with a number of representatives from agencies for international cooperation.

Words of acceptance
By Fernando Rendón